Lying is a sin we commit with our mouth. Proverbs tells us, there are seven things the Lord detests, of which, a lying tongue and a false witness who pours out lies are two. The Lord hates these things because they hurt people, and God loves people. Here is what God is saying:. The reason lying is detestable to God, is because it is opposite to His nature.

Lying can become a stronghold. Some people will keep lying and lying until it becomes natural to them. Proverbs says, worthless and wicked people plot evil and constantly stir up trouble. Because perversity is in his heart, it comes out of his mouth.

Are you really burdened about that person you are talking about? Is your heart broken about this person? This is a false and malicious report about someone. Never report what you heard from someone about someone else. Be careful — not all that you read on the internet is true! Slander is deadly. Let us stop giving negative reports. We want New Life to be known as a Church that has gracious speech.

The Church should be the safest place to open up to others. The Church ought to be a haven for hurting people. James 5 says, to confess our faults to one another that we may be healed. And these ought not to be spread all over the world. When we curse, Paul said our words are like the stench of the grave Romans Most times when a person curses, there is a root of bitterness with it. We are to bless others, not curse them. When we curse, we are speaking negative of someone or something. A person who curses is not blessed. Psalm says,.

The Sins Of The Tongue

That is blasphemy and it is a sin. Colossians tells us to get rid of dirty language. The cure for talking too much is simple: shut up and listen!

God has given you two ears but only one mouth for a very good reason! People who listen more are apt to be people who learn more.

They are also less likely to be bores! You might find it interesting to note that the word "devil" in Greek means "a slanderer". Whenever we engage in slanderous conversation we become devilish—quite literally. All slander has its roots in gossip, which is talk about personal or sensational facts about others.

This is diabolical at all times, seeing as how slander is character assasination, worse than murder because here the victim is still physically alive and having to deal with a mutilated reputation. Not only is this evil, it renders our worship of God useless. 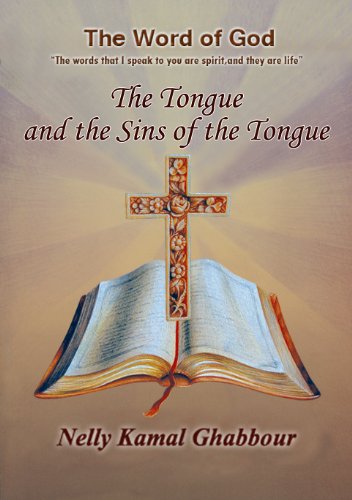 You simply cannot praise God on the one hand while debasing your brother on the other. James has plenty to say here as well: "With the tongue we praise our Lord and Father, and with it we curse men, who have been made in God's likeness. Out of the same mouth come praise and cursing. My brothers, this should not be. Is it okay to speak good, then? Yes, but my own advice is not to speak about anybody. Even if you mean to speak well of somebody, conversations about people invariably end up with some calumny spoken, some belittlement, some disparagement.

Examine your own experiences in the matter and you will see that this is true. It has to do with the tongue being "a restless evil, full of deadly poison" James That's a description of the fangs of a snake. The best way to render a snake impotent is not by defanging it, but by refusing to give it freedom to move. Do not be quick with your mouth, do not be hasty in your heart to utter anything before God. God is in heaven and you are on earth, so let your words be few.

Have you ever played the word game Blockbuster? A question is thrown at opposing teams and the team that hits the buzzer first gets to answer first.

In their hurry to be the first to score points a team will often hit the buzzer before the question is even half way completed and end up having no idea what to answer. We are guilty of the same thing in conversations. In our eagerness to get the first word in, we often open our mouths and blurt out the first thing that comes to mind, which is, more often than not, asinine.

To quote James again, though slightly out of context: "Everyone should be quick to listen, but slow to speak" James We are often guilty of this sin with God too, making him promises without thinking them through. Proverbs says that there is more hope for a fool than a man who is hasty with his words, which is a stern warning because Scripture has nothing good to say about fools. For if he lays the foundation and is not able to finish it, everyone who sees it will ridicule him, saying, 'This fellow began to build and was not able to finish.

This is another sin of the tongue that comes straight from the devil, whom Scripture refers to as "a liar and the father of lies" John When we lie, we immediately adopt Satan for a dad and condemn ourselves in the eyes of God, who abhors liars and promises them a bath in "a fiery lake of burning sulphur" Rev.


The cure to lying comes from understanding the main reasons we lie. Many lies are told with the intention of "gaining face" with others, largely because we obtain our sense of worth by what others think of us. Others are told as a cover up to sins. True Christians gain their sense of worth by what their heavenly father thinks of them and consequently are spared the trouble of lying, either to cover up a misdeed, or to stand tall in the eyes of their friends, because they lead lives pleasing to God rather than their fellowmen.

True Christians also don't need to worry about lying to God, himself, in their prayers, which is something many of us do, albeit without realizing it. How often, for instance, do we sing hymns with intense passion, while not actually living or truly meaning the words contained in them?

Consider the lyrics contained in the hymns "I have decided to follow Jesus" or "He is my everything"; are we truly honest when we sing them? Everyone lies to his neighbor; their flattering lips speak with deception. Flattery and boastfulness are two more sins of the tongue, both practiced with abhorrent frequency. Flattery is a contemptible sin of speech, a lie masquerading as a compliment. We flatter others, usually to get something out of them, and are in turn flattered.

The latter is as dangerous as the former, and even more so when it comes to our spirituality. Paul, in his letter to the Romans, warns against those who cause divisions and put obstacles in the way that are contrary to God's teachings, often using "smooth talk and flattery to deceive the minds of naive people" Romans Even more repugnant—if that is possible— is boasting.

I have seen Christian "leaders" strut into prayer meetings with an air of superciliousness that makes my stomach churn, interspersing their pontifications with endless bragging, usually about their wealth, which they claim is a result of a "reward" for being in service to the Lord. I dare not consider the implications of this theory on our saints, most of whom lived below, or close to, the poverty line. They claim Scriptural justification for their bragging by quoting Jeremiah Let him who boasts boast in the Lord.

Understanding this verse correctly actually works as the best cure against bragging, rather than a defense for it. You are what you are because God has decided it to be so. Just think for a moment about a beggar on the streets of Lahore, or a soldier with his intestines spilling out of him in war-torn Baghdad, or a starving child in Ethiopia, or even just a simple, ordinary farm hand. Realize that you could have been any of them. The only reason you are not is because God decided so, which makes it foolish to believe that you had anything much to do with what you are or who you are.

Once you understand this, everything falls into perspective, and the humbling is automatic.

The above are just a few sins of the tongue. There are several others including obscenity, foolish talk and coarse joking Ephesians ; angry talk 2 Cor.


All these take us away from God's path and we have to learn to rein in our tongues if we are to stay on it.